Zorays Khalid
Share Tweet Share Pin
IMF calls on Pakistan to raise electricity prices to 31.60 Rs per kWh. Here is a roundup of Solar Prices in 2022
Zorays Solar presents you its customer data for average 10.44664971kWp solar solutions in the year 2022 along with what was the average per dollar rate in Pakistan rupees. 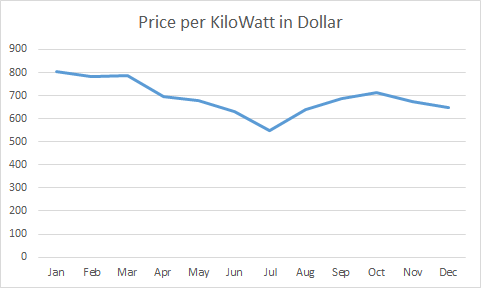 The average price per Kilowatt for the solar system remained $690.6802876 in Pakistan The average price per watt includes After 20% GST on Parts and 16% on Services (non-Filer) from Jan to Jun and no GST from July till date. This helps us understand why there were a little number of quotes in the first few months despite Prime Minister’s GST removal as the SRO for exemption became practical only after April. This histogram also depicts why people wait till peak summers to invite the most number of quotes. Remember, these are only quotes ranging from 10.00kWp to 10.99kWp. The price per watt in Pak Rupees trendline somewhat follows the price per Kilowatt in Dollar w.r.t. equivalency from the average price when converted with the respective month’s average exchange rate. 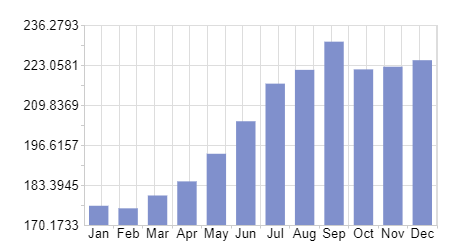 Here is why the dollar’s worth may not decrease against Pak Rupee, and why this could lead to a decrease in buying power:

First, the exchange rate between two currencies is determined by a number of factors, including the relative supply and demand for each currency, the interest rates set by the central banks of each country, and the overall economic conditions in each country. If the demand for the Pakistani rupee is low relative to the supply, or if economic conditions in Pakistan are not favorable, this could put downward pressure on the value of the rupee against the dollar.

In addition, if the central bank of Pakistan is trying to maintain the value of the rupee at a certain level, it may intervene in the foreign exchange market by buying or selling rupees or dollars. This can help to stabilize the exchange rate, but it can also have the effect of decreasing the buying power of the rupee, as it takes more rupees to purchase a given amount of dollars.

Finally, if the Pakistani government is running a large trade deficit (i.e., importing more goods and services than it is exporting), this can also put downward pressure on the value of the rupee, as the country will need to buy more foreign currency to pay for its imports. This can decrease the buying power of the rupee, as it takes more rupees to purchase a given amount of foreign goods and services.

International Monetary Fund is wanting Govt of Pakistan to increase the per unit electricity cost for Pakistan to 31.60 Rs / kWhr. If you intend to install solar any soon, now is the time. Because the Government would eventually have to increment the per unit cost in order to meet IMF requirements.

It is difficult to predict with certainty what the solar trends will be in 2023, as they will depend on a variety of factors, including technological developments, government policies, and economic conditions. However, some potential trends in the solar industry that could emerge in 2023 include:

Are you waiting for the solar panel price to reduce?

There is a surge in the demand right now but also there are about 330 containers stuck at the port. All are having demurrages that are to be paid. This shall automatically escalate the prices as of now the Letter of Credits above $100,000 can not be serviced whereas one 20 ft container which contains about 373kW is roughly costing $176000. It has been confirmed through resources that 8 Lac Pakistani Rupee (late fees) per container accumulated since imports were hampered. Earlier, only shipments up to $50,000 were being expedited that too of pre-approved LCs.
Today, the State bank does not allow LCs automatically until Dollars for export arrive in the kitty. Unfortunately, in the open market, the dollar is being blacked in 270 Rupees per dollar. Hence, the market hoarders are calling their shots against scarcity and huge demand-supply deficit. The cent per watt FOB price is still 0.25 to 0.28 for the solar modules which constitute roughly 60% of the total quote price of an on-grid solution. Well, who would control the dollar and hyperinflation of the lobbyist importers every time the Pakistan rupee devalues? Speculations are that the panels’ cost will surge to 100 Rs. per Watt in retail at the start of the new year 2023. Are you waiting for 1 $ to cross Rs. 300? Point to ponder for the consumer and industry fellows.

Pakistani Rupee per 1 US Dollar Monthly averagePrice per KiloWatt in Dollar Vs. Price per Watt in Rupees